Almost by a complete fluke, I began creating music for children in 1999. I walked into the offices of Direct Source Special Products (a budget CD/Video label with massive sales in the USA and Canada via Walmart, Target etc.) and confidently told the president that I could produce any kind of music they needed. This was stretching the truth a bit. All I had was a portable multitrack digital recorder, a cheap microphone and a bit of space on my dining room table.

A week later I got a call from the company. 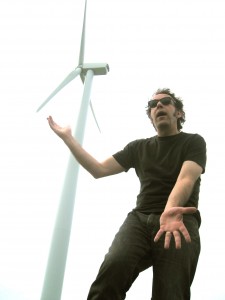 “Can you do kids’ music?” they asked.
“Of course I can!” I said.
“Good! We need six finished CD masters in 8 weeks.”
“No problem!” I said and quietly had a heart attack.

Somehow I got through that first project and so began my career producing children’s music which is now in its 15th year. Those first CDs sold extremely well and within 6 months I had become a full-time record producer/successful songwriter going on to produce literally dozens and dozens of masters in the first 2 or 3 years. The albums usually went by generic titles like “Silly Song Parade”, “Songs for the Car” or “Sleepy Time Classics”, with my name in very small print on the CD sleeve and under the titles of original songs. In other words, I wasn’t featured as an “artist”.

Soon I was headhunted by another company called KIDZUP which created only children’s music. I began to produce music (much of it educational) for them as well as for Direct Source. I used the nom-de-plume “Fat Al Davis” to differentiate myself from the first company and began churning out CD after CD for them as well. Again with my name “Fat Al Davis” listed as producer and writer in small print at the bottom of the CD insert. In consequence I may have been the bestselling “unknown” artist in the kids’ music business as combined sales of both companies climbed into the millions.

KIDZUP founder (Wendy Wiseman) and creative director (Sherry Segal) formed a new company called Kiboomu in 2010 and asked me to produce their material which I continue to do to this day. While I love the work and the people I work for, I began to hunger for something more – that is to make records under my own name and create the music the way I want to make it: songs that speak to the heart and the imagination of a child.  And that, dear reader is why this site is here.

On this site you will find a few of my songs – new and old, previously published and self published. I will be posting new songs as they arrive, so please come back often and feel free to let me know your thoughts. I am now working on my first solo record to be released in the winter of 2015. You’ll hear about it here first…